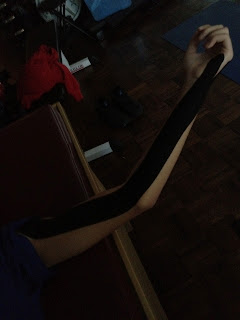 About a month ago my nephew injured his left wrist while playing basketball in which he fell onto his left arm where his wrist was extended, MTPs extended, and IPs flexed. I actually saw him before he he went to a medical doctor and from my clinical exam I didn't suspect any fracture of the left radio carpal joint. He did present with moderate swelling by the lateral wrist with hypo mobility of the joint as well with no deep point tenderness of the radius and scaphoid as well as all neighboring bones upon palpation. When he went to the doctor (PCP), he was diagnosed with a possible fracture of the "snuff box" (already you begin to sense some medical incompetency) and was casted from the wrist to the MTP joints (again,more incompetency) for about a week. After the x-rays were negative for fracture the cast was removed and there was some obvious increase in wrist and hand stiffness.  A couple of weeks after the cast was removed, my nephew had moderate weakness of the 4th & 5th digits into finger adduction and much difficulty extending them as well.  He needed to go to an orthopedist to get a note for school and he went to a local one in Howard Beach who said that he had nerve damage and referred him to get an EMG to another local doctor. When asked about his plan of care and prognosis he said that if the nerve is damaged that there was nothing that can be done and that physical therapy would be useless.  This is where it gets personal...


My nephew is 13 years old and why would you recommend an invasive procedure such as an EMG to a young kid if regardless of the results, you didn't think anything can be done? Why? I'll tell you why: Money. Unnecessary medical testing rather than a simple, COMPETENT clinical exam makes more money for the medical practitioner.  Here's an orthopedist who clearly did not perform a basic clinical exam. Here's what I found when I started to treat my nephew: Inhibited 4th & 5th palmar interossei by facilitated dorsal interossei; inhibited extensor carpi ulnaris by facilitated flexor carpi ulnaris; inhibited forearm pronators by facilitated biceps; and inhibited latissimus dorsi by facilitated left posterior superior oblique; hypertonicity of the left deltoids, upper trapezius; inability to adduct the 5th & 4th digits mostly with the wrist in extension, moderately with the wrist in neutral, and minimally with the wrist flexed (but not completely adducted).  Movement assessment revealed a bias/shortening towards the Superficial Front Line (ala Tom Myers myofascial meridians) with insufficient bending pattern lacking flexion from the hips with excessive flexion from the thoracic and lumbar spine, knees, and toeing-out of the feet.

If there was any nerve damage it would most likely be of the ulnar and median nerves. The ulnar nerve gives off a dorsal cutaneous branch a little bit proximal to the wrist where it has no motor function. As it enters into the wrist through Guyon's canal (between the pisiform and hamate carpal bones), it has 2 deep motor branches in the hand and 1 superficial sensory branch in the palmar aspect of the medial hand.  If the sensory branch is compromised, a loss or decrease in sensation would be noted on the palmar aspect of the ring and pink fingers. If the motor branches are compromised (along with median nerve damage), a classic sign would be a claw hand deformity where there's a loss of intrinsic muscle function and overactivity of the extensor digitorum and hyperextension of the MTP joints; another sign would be a benediction hand deformity where the compromised motor branch of the ulnar nerve results in wasting of the interossei muscles, the hypothenar muscles, and the two medial lumbrical muscles (basically, the ring and pinky fingers would be flexed while the other fingers are extended.  My nephew did not exhibit any loss of sensation in the wrist and hand and did not exhibit any hand/finger deformities. His main difficulty since having the cast removed was with adduction of the ring & pinky fingers.


Since his hand and wrist were casted in a way where the dorsal interossei were in a shortened position, especially of the 4th & 5th digits, this may explain the difficulty to adduct them upon cast removal. It is not uncommon for soft tissue contracture to occur as an adaptation to immobilization for even a short period of time such as one week.  Also, regardless if there was any "nerve damage", there exists inhibition of motor function as a compensation of the nervous system to create a sense of stability to the system with accompanying facilitation of other surrounding musculature.  As I always teach my patients, "the nervous system always goes towards strength and avoids weakness", as a survival/protective reflex.


After just three treatment sessions of soft tissue manipulation, joint mobilization, and neuromuscular re-education, my nephew has regained greater than 50% of his 4th & 5th finger adduction active mobility and is now able to practice dribbling and shooting hoops with his left hand.  Each treatment session focused on manual therapy based upon an updated reassessment each time we started each session followed by corrective exercises, and ended with functionally integrated movement training.  My prognosis is that within one to two weeks he may be able to return to playing basketball unrestricted. The above picture was of some kinesiotaping I applied after the third treatment session.


My 13 year old nephew sustained a left wrist sprain/strain injury while playing basketball and further unnecessary medical intervention caused inhibition of the 4th & 5th palmar interossei inhibition with an inability to adduct those fingers and a weakening of his overall grip/hand functions.  With basic, sound, and competent clinical physical therapy evaluation & treatment, an orthopedist's medical opinion of hopeless "nerve damage" is disproved.  Moral of the story: Medical doctors in Howard Beach are more businessmen than actual "healers". But seriously, it's time for the public to become more aware and skeptical and to challenge the medical establishment and know that with the current health care environment, many providers are sinking into the easy money route and drifting away from actually caring for their patients...

BTW, if you live in Howard Beach, the orthopedist is Dr. Eswar; and the EMG referral was to Dr. Bieber...Living in Howard Beach my whole life, I've noticed a trend among  medical practices here: they're all "mills", which are high volume practices with poor quality care.  High quality care is possible in a high volume practice; how do I know?  I work in one.   ;)
Posted by Michael Jocson at 8:20 PM