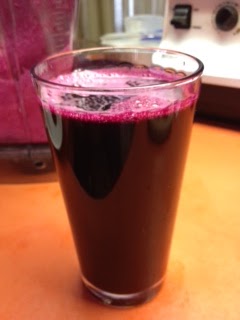 A couple of weeks ago while on vacation, I went out to eat with family and ate some things that were outside of my usual diet. This often happens when one is away so you try to do your best with what you have. I happened to wake up the next day feeling like absolute shit and because this commonly happens in these types of situations, and being that Health is one of my biggest priorities in Life, I knew of some old-fashioned remedies that always come in handy when away. My wife and I went to a local Whole Foods Market that had a juice bar and I had a carrot-apple-beet juice. Within the hour, my symptoms of lethargy, GI discomfort, bloating, and joint achiness disappeared.

Another instance was when my wife decided that she no longer cooks on Fridays and bought some take-out fried chicken from Dirty Bird in NYC. Now Dirty Bird isn’t so bad since they use free-range Amish chickens but their biggest downfall is that they fry their chickens in canola oil. Canola oil is an industrial by-product oil that use been maliciously promoted as a “healthy” oil due to its “omega-3” fatty acid content. This oil is unstable and goes rancid very easily facilitating a significant inflammatory/immune response in our bodies when consumed. It’s cheap and that’s why food establishments use it. It’s NOT healthy at all. Anyway, I’ve recently eliminated about 90-95% of all vegetable & nut/seed oils, as well as grains from my diet for the past 6 months since our baby girl was born earlier this year. Eating the fried chicken after an 11 hour work day, I was so hungry and had little reserve to prepare my own food, it did taste great but as I always tell my clients, “you play, you pay”. The next morning I woke up with a soreness in my right sacroiliac joint that interfered with bending movements. Historically for me, this happens when I eat too much gluten-containing grains and other processed food junk. I become a bit constipated, flatulent, bloated in the abdomen, and increased joint pain, mainly in the low back due to the viscero-somatic relationship of the gut and lumbo-sacral spine. To remedy this, I decided to drink some freshly strained beetroot juice a few days after I had the fried chicken. Beetroot juice is an absolutely powerful beverage and should not be taken for granted. You can do a Google search on its benefits and you’ll find that it’s a blood purifier, liver & gallbladder detoxifier, lowers blood pressure, has anti-cancer properties, aids digestion & elimination, and may even improve one’s skin health. I don’t know about all these benefits but I do know from personal experience with experimenting with several “liver & gall bladder cleanses/flushes” (for several years) and with extreme fasting, what it feels like to manipulate liver & gallbladder and GI tract functions. The beetroot juice appears to have an effect in stimulating bile release which assists the liver & gallbladder in unloading stored toxins and releasing them into the colon to be eliminated from the body. In layman’s terms: it can clean you out and make you poop more effectively. I drank a large amount of beetroot juice alone, about 12 ounces and immediately felt nauseous and had to lie down for about 20 minutes. Afterwards, when the nausea subsided, it stimulated a massive bowel movement and about an 80-85% reduction in my low back soreness. Pretty awesome, huh? I used to feel similar experiences after going through a liver/gallbladder flush protocols. Beetroot juicing can be considered somewhat of a “mini-liver/gallbladder flush” as a quick way to reset one’s metabolism after highly stressful conditions.

When you eat junk, the body will store toxicities from that junk if it doesn’t have the reserves to do it right away. Over time, excess toxicities can be stored in our organs and most commonly, into fat tissue. This creates an excess physiological load on the bodily systems and if not unloaded eventually, will lead to perceived symptoms. Usually when symptoms appear, the body’s compensatory mechanisms have already been overly taxed for quite some time. Food like beetroot juice greatly assists the body in unloading the stored toxins.

I do not suggest drinking beetroot juice alone and not greater than 1-3 ounces in the beginning. This may elicit a huge detoxification reaction such as nausea and GI discomfort. Try the juice of 1-2 beetroots along with some carrot and apple juice. Drink as needed to offset any undesirable effects of eating crap food or being excessively stressed out. At the most you may see your urine turn pinkish (possible sign of having low HCL (gastric acid) levels) and your poop turn reddish. Don't be alarmed. That's normal.

Also, do not use this as a “quick-fix” for a poor diet. You may become very uncomfortable and feel extremely sick if you do. There is no quick-fix to Health. Pay Attention. Experiment and Be Truthful with your experiences.

The How-To:
If you don’t have a juicer, you’ll need a blender. And a strainer as well.

-Add the produce into the blender along with some bottled spring water (enough to cover the produce)
-Blend until liquefied.
-Pour into glass over strainer.
-Drink and enjoy!

Posted by Michael Jocson at 4:42 PM