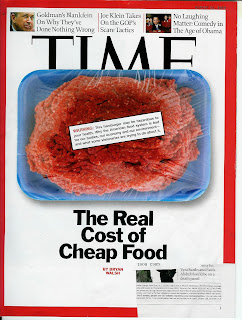 This week Time magazine's cover story by Bryan Walsh exposes on a national level our country's pink elephant which is the topic of the cost of cheap food. The "think big" American attitude has created an efficient food producing industry that as a result of being efficient to produce more for less has become tremendously inefficient if you factor in the costs to the health of the land as well as the individual. This story is riding the tide set by documentaries and books like Fast Food Nation and Food, Inc. and The Omnivores Dilemma. Consciousness is accelerating and for Time Magazine to publish such a sensitive topic, the hundredth monkey phenomenom is set in motion.

A highlight for me are some of the chart comparisons in the article such as the one comparing a grass-fed, organic, sustainably-raised cow and a conventionally-raised, feed-lot cow. Another highlight is about how runoff from chemical fertilizers used in the Midwest produces "dead zones" throughout the Gulf of Mexico. Dead zones are areas in the water that have almost no oxygen for sea life to thrive caused by chemical pollution.

Although this article exposes what industry does not want the public to know it will create a reaction from those tied to the agriculture sector. I find it fascinating reading both sides of the fence and it's clearly obvious to see the cattle and farming industries trying to defend themselves by defaming the author or saying such opinions are nonsense and unvalidated. Regardless of any arguements, which is simply school ground fighting, the article was published, front cover in a very popular media outlet. People are not innately stupid and and much respect is to be given for each individual to come up with their own conclusions.

And here's a link to an opinion from the other side of the fence. See if you can get a sense of where each side is coming from and decide for yourself. You're not stupid.