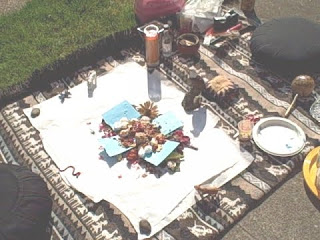 This is a traditional Andean shamanic ceremony that is an offering to all of existence. In Andean cosmology the offerings are specifically to the Pachamama (Mother Earth), the Apus (mountains), the Heavens and the Cosmos, and all of Nature. It is a gesture reminding us of how life is a celebration to be celebrated rather than a problem to be solved. The ceremony itself is a living energy that aligns itself with the rhythms of the heavens above and the Earth below and brings all that are involved in unity with the universe. One can imagine it as a living entity, a spirit, or a deva that works towards whatever the specific intention set forth by the participants. One of the most popular types of despacho ceremonies is the Ayni Despacho. “Ayni” is a quechua term representing reciprocity and right relationship. This despacho helps restore order and brings a balance throughout the continuum of energy of those involved helping the release of heavy, dark energies (hucha) allowing an individual to step fully into their lightness. The intention of the ceremony is key.

I recently held my first despacho this past week due to particular circumstances in a few of my clients lives (as well as mine). The intention was to fully surrender to life (to the Present) so as to allow balance and harmony to flow freely and to create right relationship between the mind/ego, the True Authentic Self, and the rest of the Cosmos. In other words, we step out of the way and let Spirit flow through. The despacho ceremony confuses the mind because the mind doesn’t comprehend things of this nature (which is often the culprit of one’s suffering). Instead, the ceremony takes one to a sacred level which is where the soul/spiritual natures operate. I noticed a pattern in my client’s lives, as well as mine, where once every bump in the road of the journey is cleared a tendency to want to go back to where one has already traveled arises. This is like the last temptation of Christ where once an individual gains freedom, newer responsibilities arise and those who are ready to accept them move on and those who are not have the option to go back to “Summer school” and review their lessons.

The above is a picture of the prayer bundle created during the despacho ceremony my client and I celebrated. Later that night I held a solo fire ceremony and offered the prayer bundle to the fire as a way to sign the dotted line and close the experience.

So if you noticed anything significant this past few days or week in your life, it could be your Higher Self trying to bring balance and right relationship into your life. Yes, it is true. If you are reading this, you were included in my prayers during the despacho ceremony.

Tupananchiscama (until our paths cross again),
Michael
Posted by Michael Jocson at 1:28 PM