The Meaning of Michaelmas

The following article was taken from this month's Jocson Health newsletter. I thought it was appropriate to post it to my blog so those who don't get my newsletter could also benefit. Enjoy! 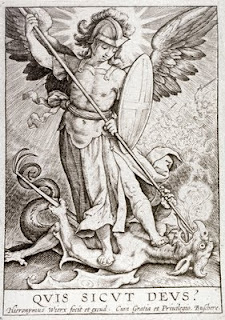 The Meaning of Michaelmas
During the end of September (9/29 to be exact), around the Jewish holidays of Rosh Hashanah and Yom Kippur and the start of the Fall season is a little known celebration that is popular in esoteric circles but utterly unknown to the masses is the Feast of the Archangel Michael. Why hasn’t commercialism banked on this universal spiritual holiday? Well, for starters, I don’t think the selling of the mythological story of Michael slaying the Dragon and banishing it from the Heavens into the depths of Humanity where it forever dwells waiting for its opportunity to spark chaos throughout. Hmmm,..I just can’t imagine Walmart making a commercial for a Michaelmas season sale where dead dragons are featured with Michael’s sword of Truth and Wisdom piercing their hearts.

So what exactly is Michaelmas?

So as the story goes, Archangel Michael slays the Dragon, who is otherwise known as Satan, Lucifer, the Prince of Darkness, etc. The Dragon was also a Divine Being who chose to separate itself away from God (or the Creator) and because it was so influential, the impulse of Michael was warranted to send this fallen angel not into the depths of the Earth, but rather into the essences of Earth’s main inhabitants, Humans. The shooting stars that are so common during the late Summer and early Fall symbolize the flashing Sword of Michael battling the Dragon. This Dragon lives within each and every one of us and the way we feed and nurture it is by not acknowledging our soul-spiritual natures as well as ignoring the soul-spiritual natures of all living creatures. The greatest energy of this Dragon centers around our heart region. Imagine the phrase “having a heart of coal or stone” and this is what happens with a fattened Dragon. When one achieves the self-realization of the God within us (ie. discovering our true and original spiritual nature), the Dragon starves.

Despite the Dragon giving a sense of evilness, it actually serves a grander purpose and has its gifts. It is because of this Luciferic Being that Man has Free Will and the capability to be independent and free. And it is for this reason that we can not “blame” God when bad things happen to good people. We did that. And as one gains a deeper understanding of this, there’s no longer any need to blame because things are simply the way they are (if this perplexes you or confuses you, some study into karma and reincarnation may benefit). And on the other hand, because of our Free Will, we can choose to fulfill our destiny of accelerating our evolution of Humanity into Higher Spiritual Beings as “begotten sons of God”. The Dragon doesn’t want this to happen.

Michaelmas is a festival and celebration of the Individual resurrecting his/her soul-spiritual natures; it celebrates the realization of one’s Higher Self. The Michael Impulse is “inspired” during the Fall season infusing us all with the characteristics of courage of the Soul, strength of the will, and the wisdom of the Light received within us. Michaelmas is the polar opposite of the Easter celebration in the Spring just like where the Spring is opposite to the Fall. In Easter, Jesus Christ was crucified on the cross (Death) and His soul was then resurrected into Heaven. In Michaelmas, the Soul is resurrected from within and what is dead is let go of without. This reflects the rhythms of the planets and the seasons where during the Spring, the Earth is in a state of expiration (exhalation) and during the Autumn it is in a state of inspiration (inhalation). In Autumn, the Earth on a superficial level is experiencing death with the shedding of the leaves and the dying of its plants while within its greatest depths it is taking in (inspiring) the newly, Heavenly forces from the Cosmos in which new growth can be manifested and “exhaled” during the Spring and Summer seasons. This is why the spiritual characteristic of Autumn is Clarity. One can not take in (and be clear with) what is new if one does not let go of what is old.

Interestingly enough, one does not have to be a Christian to celebrate Michaelmas. In fact other religions have similar celebrations around the Fall season. In Judaism, Rosh Hashanah, the Jewish “New Year” is typically around the Fall Equinox and is followed ten days later by the “Day of Atonement” of Yom Kippur. Michaelmas is about a week after the Fall Equinox and a day after Yom Kippur. In Yom Kippur, one makes amends for the past year’s sins and one can look at a sin as anything that brings one further away from their soul-spiritual natures. In Islamic religion the ninth month of the Muslim calendar is called Ramadan and it is believed that this was when the Holy Quran “was sent down from heaven, a guidance unto men, a declaration of direction, and a means of Salvation”. This is a month where Muslims intensify their worship and contemplation through acts such as fasting. Fasting is another way of clearing away the “death” within you so as to step fully into your faith. Hmmm, sounds like Ramadan, Yom Kippur, Michaelmas, and the Fall season are very much in line with each other. Ramadan changes every year due to the movements of the Moon and for 2009 it started on August 22 and ends on September 19 (the first day of Rosh Hashanah). With the coming years, Ramadan appears to be occurring earlier in the year. In the North East of the United States, we experienced some early Fall weather during the last couple of weeks of August demonstrated with a drop in the temperature and some early leaves falling in certain parts of New York. Coincidence? Probably not. The rhythms of the macrocosm and microcosm are rapidly changing and if you take an open-minded understanding of the Mayan calendar and all this 2012 talk, what you’ll find is that the times are definitely changing; and fast.

What does this all mean for you? Take advantage of the cosmic rhythms by doing some fasting and cleansing and detoxification during this Fall season. Know that the season’s characteristics of courage, strength of will, and wisdom with clarity are all there for you to use. Many of you may have already experienced some kind of upheaval in your lives within the past few weeks. Whether it be you lost your job, got sick, or someone close to you has died, or any other tragic experience, just know that you have so much more going for you at this very moment if ever in the history of time, where the rhythms are flowing and the planets are aligning and all you have to do is to get off your sorry-ass, woe-is-me little self and step fully into your True Authentic Self and “slay the Dragon” within you.

Have an Enlightening Michaelmas Everyone!
Posted by Michael Jocson at 1:45 PM

very cool, when i saw the title i thought it is a holiday you made up and named after yourself, like seinfeld, festivus,