The Art of Pooping

The following is a complement to a recent youtube video post by Sean from UnderGround Wellness.com; This is an article I wrote about a year and a half ago for my JocsonHealth Newsletter. Some things are alwyas relevant.

The Art of Pooping

Let go of what you think this article is about. It’s a more serious matter than what you may expect. I could have used “shitting” in the title but felt that was too vulgar; or “defecating” but felt that was too boring; so I decided to use what my 4 ½ year old son refers to his bowel movements, “poops”. We are living in a nation of constipation. Modern society is more backed up than our ancestors could ever imagine. If you’re reading this and think that just because you poop 1-3 times a day, that everything’s okay, you’re in for a rude awakening. There are two things to consider in this situation: 1) The diameter of your pipe (intestine) becomes narrower as you become more backed up. Your bowels may be moving but through a smaller hole. This is what happens before a pipe becomes completely clogged; 2) Throughout the course of the intestinal tract, some portions may be narrower or wider than others due to an accumulation of uneliminated feces, mucoid plaque, and intestinal wall encrustation. S

o you see, just because your bowels are moving does not necessarily mean that they are flowing as freely as they can be. Everyday life stress, poor diet choices, lack of movement, prescription drugs, lack of direction in life, hating your job, negativity, faulty posture, stubbornness, hopelessness, etc. are all reasons that can contribute towards constipation. The colon is the “elimination” center where it literally packs things up and prepares waste to be removed from the body. It also reabsorbs things that may still be useful to the body. When you’re constipated, things that were meant to be eliminated hang around longer than usual leading to a toxic waste dump type of a situation. The body will continue to function with this extra toxic load but it eventually takes its toll. Laxatives may help to a degree but are not the”quick fix” solution that many people believe them to be. Years of uneliminated feces and other toxic waste will not be removed so easily from a round of taking laxatives. Although there are many things one can do to address constipation, I will focus on the physical, or mechanical, aspects that can help assist the situation. And quite possibly relieve or lessen the need for the other approaches.

The “porcelain throne” was actually invented in the UK as a way to “civilize” such a “barbaric” act as defecating. Previous to about the late 18th and early 19th centuries, our ancestors didn’t have toilets and were pooping by the most natural way our bodies were meant to poop: by SQUATTING. In ancient civilizations, the only people sitting to poop were royalty and the handicapped. Squatting was considered too lowly and an act of the common folk. Sitting was a much more dignified posture as compared to the animalistic squatting position. The problem that arose is that the sitting posture was more for the satisfaction of the ego rather than the function of the body. If one looks at the anatomy of the human colon, what you’ll find is that humans are the only species where our bowels have to move upward against gravity. This is evident where the small intestine transitions into the large intestine by the ascending colon (as an anatomy refresher the ascending colon goes up on the right lower front ribcage and then across the lower rib cage as the transverse colon, to the left, where the descending colon goes down towards the pelvic basin and turns into the sigmoid colon before it turns into he rectum and then your anus). Before the small intestine turns into the large intestine there is a one-way valve called the ileocecal valve that prevents feces from re-entering the small intestine (which would contaminate it). Around this area attached to the ascending colon is the appendix. The appendix has an important function (despite what many in the medical community think) in “screening” toxins as they enter the colon. At the other end of the colon, by the sigmoid portion where it meets the rectum, there is another valve that prevents feces from leaking out of the anus until one is ready to go poop. This valve is called the puborectalis portion of the levator ani muscle. This muscle literally “chokes” the rectum so that we don’t poop ourselves.

The Art of Squatting

In the natural squatting posture, the pressure of the right thigh against the ascending colon allows for the ileocecal valve to completely close and creates pressure so that the feces can be mobilized upward through the ascending colon. At the other end of the colon, the pressure of the left thigh against the rib cage allows for the puborecalis muscle to completely relax and open, allowing for a clean evacuation of the feces. Ideally this process is effortless and there’s no straining involved. During sitting, the ileocecal valve is not supported enough and is loosely “open” allowing for the feces to back log into the small intestine. This can create a tremendous stress to the appendix which can also become back logged and lead to the condition of appendicitis. Also, as a result of sitting there is no mechanical pressure against the ascending colon to assist peristalsis, so the common way for people to get things moving is to strain. Straining involves holding one’s breath and pushing. This is called a Valsalva maneuver and causes the diaphragm muscle to be blown downward which causes the pelvic floor to also become “ballooned”, or pushed downward. Sitting also reinforces the “choking” of the rectum by the puborectalis muscle which is another reason for one to strain. Pooping while sitting is obviously possible, but my point is that it’s not as efficient or ideal as squatting. You’re creating unnecessary stress to the body from a lifetime of pooping on the modern day toilet. Conditions such as appendicitis, constipation, uterine/ovarian fibroids, prostate dysfunctions, bladder incontinence, endometriosis, hemorrhoids, irritable bowel syndrome, Chrohn’s disease, and any other disease or dysfunction of the abdominal/pelvic viscera as well as degeneration of the lumbosacral spine, hips and knees can be linked to seated pooping.

When I physically assess clients, one of the movements I check is their ability to fully squat to the floor. This is not only giving me information as far as the mobility of their spine and lower extremities but the fu 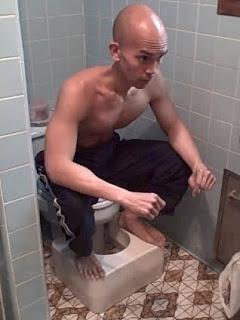 nction of their digestive system as well its relationships to the rest of the body. If I find someone is unable to fully squat, part of their program is to get them as much as possible to do so. In this way, I’ve addressed many birds with so few stones. My recommendation for many of you right now is to get your ass off the chair and see how low you can comfortably squat towards the floor. Another thing I recommend is to either purchase or make your own “squat stool” to be placed around your toilet. A device such as the Nature’s Platform product is a fantastic way to allow for a natural squatting position. I no longer recommend the Life Step foot stool since it is not as effective as the Nature’s platform. The Life Step still promotes most of the weight on one’s ass (or sitting position) rather than the feet.

In summary, if you’re not squatting, you’re not pooping effectively. If you feel you can’t squat (for whatever reason), hire someone that can help you. This is something so simple and so effective that I put it on my list of “Simple Things Patients Can Do on Their Own before Seeing a Doctor”. I also classify it as a clinical pearl. Try it. It works. 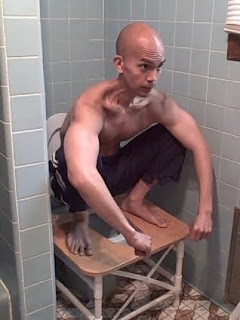 Posted by Michael Jocson at 7:21 PM

wonderful in one word.Your experiences would help other physiotherapists much.A great thanks on behalf of Physiotherapist in Sydney and keep writing such excellent articles.

I have read some excellent stuff here. Certainly worth bookmarking for revisiting. I wonder how so much attempt you place to make this type of fantastic informative web site. Best Orthopedic Doctor in Hyderabad

Hi, i think that i saw you visited my web site so i came to “return the favor”.I am attempting to find things to enhance my site!I suppose its ok to use some of your ideas!!Nice tips dear. Thanks for sharing it.. Orthopedic Doctor in Hyderabad

I just want to say that all the information you have given here on is awesome. Thank you Orthopedic Hospital in Hyderabad

I would like to say Thanks for helping.
Best Orthopedic Doctor in Hyderabad

Great extra tip about Orthopedics. and thank you for sharing Orthopedic Surgeon in Hyderabad

I would like to say Thanks for helping. Orthopedic Surgeon in Hyderabad

I appreciate that you took a simple, how to article by explaining the process step by step and how to "The art Of Pooping"
Orthopedic Doctor in Hyderabad

All your hard about curating this informative post on "The Art of Pooping" is much appreciated.
Orthopedic Hospital in Hyderabad

I would like to say Thanks for helping The Art of Pooping.

Hello It’s really a nice and helpful piece of info. I am happy that you shared this helpful info with us. Please stay us informed like this. Thank you for sharing. bye
Tangki Panel
Tangki Fiberglass
Jual Septic Tank