Your Gut and Your Manhood 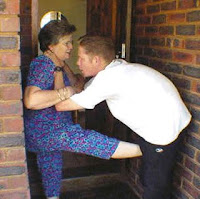 Recently, while playing rough with my 6 year old son, he accidentally kicked me in my testicles which created a instant dull pain in my gut enough for me to fall to the ground. Now I've been hit in the groin before but I've never made the connection between the resulting gut sensation and a guy's manhood until now.

What happened is called a viscerosomatic reflex where a stimulation of one organ can reflex to another, separate part of the body.  My testis, being the organ, were traumatized by a roundhouse kick from my son and reflexed pain to my gut wall.  This occurs because of neighboring structures being innervated by the same spinal level.

After the pain subsided a revelation occurred to me that what if this reflex was reversed, meaning, what if stress to the gut can reflex to the testis?  Stress to the gut may come in a variety of ways such as constipation, diarrhea, malabsorption, poor digestion, food intolerances, chronic gas, and inflammatory conditions of the gut.  If such cases were chronic for a significant amount of time, could this not affect the function of the testis?  The testis is where testosterone and semen are produced.  For all those guys diagnosed with low sperm counts/poor fertility and hormonal issues, they could possibly also have poor gut function.

Bottomline:  If your maleness (testosterone/sperm count) is an issue, address your gut issues by cleaning it up, eat better nutrition, improve digestion, and elimination and learn to block those low kicks.
Posted by Michael Jocson at 2:14 PM